My 5745 has blue smoke and I was advised to drive it hard so that old soot and coke could be burned away. But I did not get to try it completely, because the engine power was weaker than it should be. After reading about the injection nozzle here, I tested them and turned off the diesel supply on one nozzle at a time. On three there was a noticeable difference in the engine speed, but on the 4th there was no change. So I changed the injection nozzle. Then I see that in three of the cylinders there is a mixture of oil and water around the nozzle. The gray mass is a sign of oil and water. (Picture). I also found that it leaked diesel from one - where I made a red ring.

The engine oil does not have this gray color, it is thin (maybe there is diesel in it? I do not think it smells like diesel from the oil, but do not know for sure.). I changed the cylinder head gasket (and oil) this summer, and have driven less than 10 hours since then. Before I replaced the head gasket, there was pressure in the cooling water so that it bubbled heavily in the radiator and the water was thrown out. Can the oil and water mixture be there from before I changed the cylinder head? Could it be the Injector holder bush or the sealing washer that leaks?

I learned Deutsch in school to, but didn't do my very best. But luckily we have Google translate now.
Look with a flash light through the injector hole to see the piston. The color gives you an indication, dull black is what you want to see. If your engine oil is not "milky" and the cooling fluid has no oil in it than I would first try to get cylinder number four running. Check valve play and test the injector from cylinder four.
Clean the leak in the red circle with brake cleaner, and than watch where the fuel leaks from.

Thank you very much for usefull tips. May be I should have changed the Injector holders and the sealing washer, are there possible to drag them out withouith taking off the head?
-------------
Vielen Dank für nützliche Tipps. Vielleicht hätte ich die Injektorhalter wechseln sollen, kann man sie herausziehen, ohne den Kopf abzunehmen?

Yes, you can. Simply unscrew the Injector saddle, the pull out the complete injector. 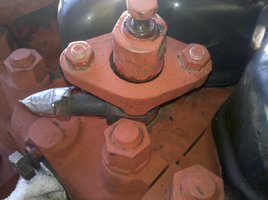 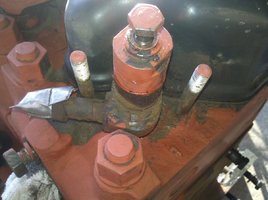 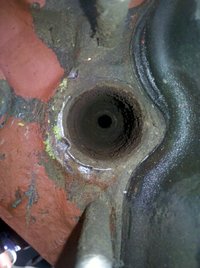 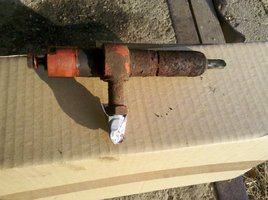 I found this (not a Zetor);

Order the washer together with the bushing. If you pull the bushing out you will see if the washer is under the bushing.
I paid Euro 3.44 for the injector insert 95-0502 in january 2021.

Your injectors look really bad, the thin bush is like a cone to seal the injector.. maybe it is better to pull the heads again and change the bushes or use new heads or rebuilt heads, remember, the old valves could also be worn. The injector valves should also be new and tested on an injector testing device, to check the spray and opening pressure (175 bar).
Zuletzt bearbeitet: 5.10.2021
"Sieht auf den ersten Blick schlimm aus. Ist es auch"

I changed an injector and all four injector nozzle this autumn, then the tractor has been standing still for 4 months. Today I adjusted the valves - the first cylinder was very wrong.

Result: No blue smoke when I removed snow from the road up to our cottage today and the engine was much crackier / stronger than before. I had not thought that a misaligned valve could do that much wrong.